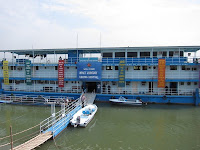 Today I visited the floating hospital. This Impact project is appropriately named Jibon Tari, which means Life Boat in Bangla.

The floating hospital looks like any other three-story building when you see it from a distance. But as you get closer, you realize it’s not connected to land – it’s sitting in the middle of a river surrounded by rice patties.

After parking the car, we made our way down the steep bamboo plank. Jibon Tari was parked on the edge of a river, but for some reason this edge happened to be several stories above the water.  We were warmly received by the hospital staff who escorted us to the dining room where we had a delicious breakfast.

The beverage of choice during breakfast - though I didn’t know this until afterwards - was river water. Stifling a twinge of panic, I waited for the explanation and slowly recalled that Ann had previously told me about this unusual water source. The Jibon Tari, in an effort to become self-sustaining, has been outfitted with a filter system that purifies the river water making it perfectly safe for drinking. (So far, so good)

Following breakfast, we were taken on a tour of the hospital. Friday is the day of rest here in Bangladesh, so although the hospital staff was busy showing us around and making sure we were taken care of, the doctors and nurses had the day off and no patients were being seen. Though I would have loved to see the hospital in full swing, the absence of patients made it possible for us to view all of the rooms, including the surgical theater, which brought back memories of the cataract surgeries at the Impact hospital in Chuadanga. 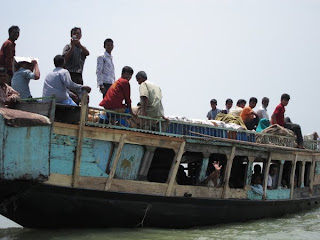 Leaving the theater behind, we climbed onto a speedboat and took off down the river. For Rachel and Philip, who were accompanying me and Monsur, one of the founding chairmen of Impact, on this trip, the sights were new and different. To me they’ve become familiar.

Women washing clothes in the river, children swimming and playing, men fishing, and the sounds of life all around. The wind in my face felt great as we raced across the water. People waved to us from the boats and scrambled for their cell phones so they could grab a quick picture of the foreigners on the river.

Back on the Jibon Tari, Monsur informed us that lunch would be served in an hour and a half and that, in the meantime, we could “take rest”. Seeing the inquisitive expressions of the people watching the hospital from the riverbanks, resting inside was about the last thing I wanted to do. I asked for a staff member to accompany me on a walk.

A parade of adults and children slowly formed behind Raihan and me as we walked through town. A large trough of rice over a fire caught my eye, but much of the rice, still in its husk, was spread out on the cement floor, drying in the sun. This was a familiar sight - driving around the rural areas, I’d seen women walking through the carpets of rice, kicking it to stir it up for proper drying. After interacting with the women of the home, I took off my shoes and attempted to thresh the rice myself. 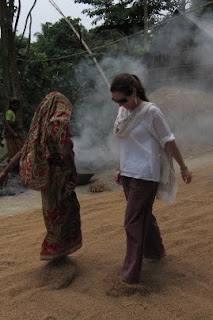 The soles of my feet scuffed along the asphalt and the hard grains of rice jabbed at my feet, but I was having a great time! One of the women soon joined in. She refused to pose for a picture with me until we’d finished going through the whole batch of rice.

On we went down the road stopping periodically to visit a house. Whenever we did, the neighbors would undoubtedly come by to invite us over to see their home as well. Without meaning to, we turned our walk down the street into a Jibon Tari campaign. At each stop, I asked whether anyone had visited the hospital, if they had plans to, and with Raihan’s help we even referred some people to the hospital. The response was great.

Back at Jibon Tari, we ate lunch before heading back to Dhaka. The trip was short, but well worth it. Jibon Tari will remain in its current location for 3-6 months. During that time, basic ailments will be healed, sight restored, clubbed feet repaired, and smiles will take the place of cleft lips. All of which will bring hope back to the people of rural Bangladesh.
Posted by Andrina at 10:20 AM